Lawyers of Oneida County met in the John Street Courthouse in Utica on January 2, 1872 and a committee consisting of E. J. Richardson, William Kernan and George W. Adams was appointed to draft the necessary legislation for incorporation. The Association of the Bar of Oneida County, predecessor of our present Association, was incorporated by the legislature on January 26, 1872 "for the purpose of maintaining the honor and dignity of the profession of law, of cultivating social relations among its members, and increasing its usefulness in promoting the due administration of justice".

Alexander S. Johnson was elected the first president but there is no record of any further meetings. Apparently the members turned their attention to the establishment of a law library in1876.

It appears that the few local bar associations which existed prior to 1900 were basically social gatherings. At a state meeting of lawyers in 1895 one speaker said that "Most of our local associations appear to do little, except give annual banquets to the Justices of the Supreme Court, or to some incoming or outgoing judge of a local court, at which fulsome eulogy and wit of a local flavor absorb the speech making".

Awarded for outstanding service to the profession and the community. 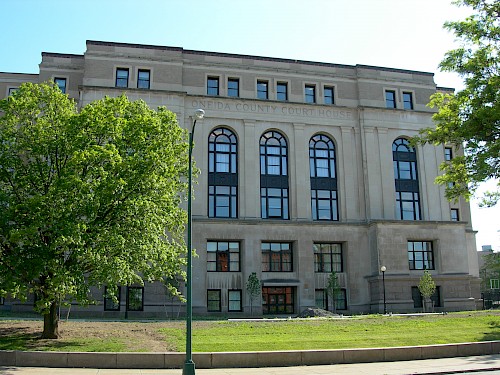 In 1801 Oneida County had two jails but no Courthouse. Court was held in a school house in the Village of Whitesboro. An act of the legislature in 1803 provided that the local Courts of Common Pleas and General Sessions "shall hereafter be held alternately at Rome and Whitestown." The result was that Oneida County became a two shire County. The County began the construction of its two Courthouses but a lack of money halted construction until the legislature authorized a special tax levy.

The Courthouse in Whitesboro, still standing on the Village green, was built in 1807 in the Federal style of architecture. The first Courthouse in Rome is believed to have been designed similar to the one in Whitestown. It was destroyed by fire in 1848.

In 1849 the County authorized the building of a new Courthouse and jail in Rome at a cost not to exceed $12,000. The Courthouse was completed sometime after 1850 and is still in use. A two-story addition was added on the North James Street side to house County offices in 1896. In 1902 the porch was rebuilt and a dome added to permit light and ventilation to the upstairs courtroom.

Utica was incorporated as a city in 1832 and its growing population began to find it inconvenient because of a lack of transportation to attend Court sessions in Whitesboro. In 1839 the legislature required that all Courts of Common Pleas and General Sessions be held at the Academy in Utica which was a brick two story school building, used as such, erected on the easterly side of Chancellor Park with an entrance on John Street. This act of the legislature in effect stripped Whitesboro of its status as a half-shire bailiwick.

Utica School Commissioner James Watson Williams, in a lecture delivered in 1868, said of the Academy and Courthouse: "It was never commodious for its purpose, and was ill calculated to serve the double purpose it was destined to. Constables were required to stand guard during play hours to stifle urchins' shouts, while the sacred silence of study hours was interrupted by the tread and turmoil of throngs of jurymen, witnesses, attorneys and judges; to say nothing of the pleasant grievance of being routed out of this or that recitation room to make way for the jurymen about to cast lots or toss coppers for verdicts".

Thus, the state legislature on March 17, 1851 authorized the County to appropriate the sum of $15,000 "for the purpose of building a Courthouse and jail in the City of Utica". The foundations were laid for a new Courthouse on John Street but the work was stopped by lack of funds. The legislature on April12, 1852 authorized the appropriation of an additional $5,000 and construction was completed in 1853. The courthouse was an imposing building. Four Corinthian pillars on the front and a cupola gave it a majestic appearance. It no longer stands.

The legislature on March 12, 1901 adopted a statute which created an independent board of commissioners to "cause to be erected, completed and furnished, ready for use, a suitable building, upon the site acquired, for the use of the County of Oneida, as a Courthouse and for other public purposes". It also provided that the expense incurred "shall be borne and paid by the County of Oneida" and directed the County Board of Supervisors to borrow "such sum of money as shall be sufficient to meet and pay all the expenditures". The Board of Supervisors viewed this legislation as a usurpation of its powers and unconstitutional. Long litigation followed but the Court of Appeals upheld the statute and directed the Board to comply.

History of the United States Courthouse 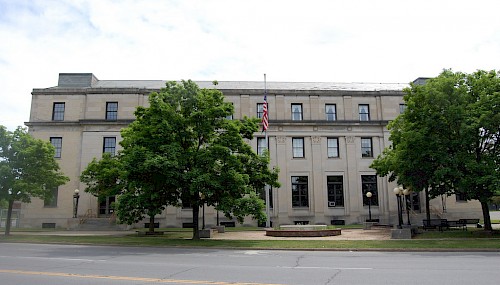 The first session of the Northern District was held in Utica in 1815, in the Old Utica Courthouse on John Street, with Judge Matthias B. Tallmadge presiding. A U.S. Courthouse and Post Office designed by the Supervising Architect of the U.S. Treasury Department, James G. Hill, was completed in 1882 and housed both the district court and, until its abolition, the circuit court.

Situated on Broad Street, the courthouse was built in the heart of the City of Utica. It was partially demolished in 1928 and replaced with the present courthouse, which incorporates portions of the earlier building’s stone walls and its basement vaults. The present Alexander Pirnie U.S. Courthouse and Federal Building was completed in 1929. It was designed by Louis A. Simon, at the direction of Supervising Architect of the Treasury James. A. Wetmore.

Funding for the new federal building, designated at that time to be a "renovation" of the 1882 Post Office, was authorized as part of a $15,000,000 appropriation for new public buildings at specific locations, including Utica. The original contract for the building was for $427,000, which was increased by $8,800 to include a gabled, slate roof upon which the flagpole was located.

The three-story building sits above a slightly raised basement. The basement, first floor, and second floor are roughly square, with the third floor U-shaped. The walls are clad in buff-colored brick, except for the base and center front, which are clad in limestone. The front face on Broad Street is divided into 11 bays marked by two story Corinthian pilasters supporting an entablature - a horizontal part in classical architecture that rests on the columns and consists of architrave (beam), frieze, and cornice.

Portions of the thick stone walls and vaults of the original basement remain as part of the current Courthouse. There are also reports that iron beams and posts were encased in concrete and incorporated into the present structure.

The entablature extends the full length of the front facade and around both sides. In the center of the frieze are the words “Post Office,” “Court House” and “Custom House.” Like many federal buildings of the day, it originally included a post office and a custom house, in addition to courtrooms. The post office remained in the building for about fifty years. The two entrances, at the opposite ends of the building, feature fluted Tuscan pilasters and an entablature, each approached by granite steps bounded by limestone-clad sidewalls.

The east-facing, John Street side of the building is divided into 13 bays, covered by a pitched slate roof. The western, Franklin Street side is similar, except that the rear six bays of the third floor extend above the pitched roof to allow for the height of the courtroom. The rear of the building adapts to its U-shaped third floor.

The public lobby extends across the front of the building and is one of its most elaborate spaces. The floor is terrazzo with red and white marble borders. Wide arched openings lead to stairways. Wide corridors extend toward the rear of the building.

The architectural style is sometimes described as “Starved Classicism,” a popular style for public buildings of the 1920s and 1930s, characterized by a restrained, unornamented take on Neoclassical Revival. Today, in addition to the federal courts, the building holds offices of several federal agencies.

Remnants of the post-office facilities, such as its boxes and windows, can be seen in the building’s lobby.

The courthouse is named for Alexander Pirnie, the Republican congressman who represented the area in the House of Representatives from 1959 to 1973, after serving in Europe in World War II. While in the House, Pirnie drew the first capsule of the Vietnam draft lottery on December 1, 1969. Since 1991, David N. Hurd (U.S. Magistrate Judge 1991-1999, U.S. District Judge, 1999-) has held court at the Utica courthouse. The United States Bankruptcy Court for the Northern District of New York also sits in Utica, with Bankruptcy Judge Diane Davis currently serving as the residing judge.

During the 1920s, Utica was the site of several notable criminal trials arising under the National Prohibition Act, also known as the Volstead Act. In 1927 two Utica residents, Rosario Gambino and Joseph Lima, were arrested near the Canadian border after New York state troopers searched their vehicle while Gambino was inside. The agents found liquor, which they seized as evidence, and Gambino and Lima were indicated for conspiracy to import and transport alcoholic beverages. In a defense strategy that became more common in the later era, the defendants moved to suppress the liquor as evidence on the ground that government agents searched the vehicle without a warrant or probable cause, in violation of their constitutional rights. Judge Frank Cooper of the Northern District denied suppression and held the evidence admissible.

In Gambino v. United States,1 the Supreme Court reversed the defendants’ convictions. The opinion of the Court, delivered by Justice Brandeis, concluded that the search had violated the defendants’ Fourth and Fifth Amendment rights. Although the Bill of Rights at that time applied only to the federal government, the Supreme Court held that the state troopers were effectively acting as federal agents because they were searching for evidence only of federal crimes, given that New York State then had no Prohibition laws of its own.

A later case heard in the Alexander Pirnie courthouse led to a Supreme Court decision that was, at the time, a key step forward in consideration of mandatory auto-insurance laws. The case arose under a New York statute that allowed the license of an uninsured driver found at fault in an accident to be suspended until the driver purchased insurance. The suspension could last for up to three years if a judgment arising from the accident remained unpaid. A motorist, George C. Reitz, challenged the constitutionality of this legislation on the ground that it deprived him of property without due process of law. Reitz also argued that the New York statute conflicted with the federal Bankruptcy Act, by requiring him to pay a judgment for damages arising from the accident in order to restore his driving privileges, although the judgment has been discharged in bankruptcy. A three judge panel of the district court upheld the statute, opining that drivers with a financial interest in being safe were less likely to drive carelessly.2 The Supreme Court affirmed the Northern District’s ruling, in a subsequently overruled 5-4 decision.3